I hope that on upcoming occasions relating to this summer’s World Youth Day in Rio de Janeiro, you would consider adding to your musical interludes, an extract from a piece which has both Ecclesiastical implications and is culturally evocative of Brazil. This is Sound of Bells, or Sound of Carillions, Sons de Carrilhões by João Pernambuco. I will be sending you an album with this and some other Brazilian music, for your consideration.

João Pernambuco (João Teixeira Guimarães) was an important figure in the development of music for guitar in Brazil.  He was involved, along with Donga and Pixinguinha, in the creation of the first important groups of Choroes. [picture from João Pernambuco website]

Pernambuco and Villa-Lobos were close friends, and Pernambuco was a major influence on Villa’s first works for guitar, especially the Suite Populaire Bresilienne.  The best recent source for information about Pernambuco is Larry Crooks’ book Focus: Music of Northeast Brazil.  See this post in Tumbling Villa-Lobos.

Pernambuco was involved in an important premiere of a Villa-Lobos work, the Distribuicao de Flores (Distribution of Flowers):

“The guitarist chosen to play for the work’s first performance was the most famous and popular choro guitarist of the time, João Teixeira Guimarães, better known as João Pernambuco.”  [Choro: a social history, by Tamara Elena Livingston-Isenhour, Thomas George Caracas Garcia, p. 189]

Yette’s Ghost and the NAACP

It’s January, 2013. Dr. Johnny Hunter, a Black man, is quoted on Twitter criticizing the association between the NAACP and Planned Parenthood because of that organization’s racist and eugenics history. Within minutes, after saying that Planned Parenthood has the NAACP on a leash, this Black group’s Twitter account is suspended and taken down. To put it succinctly, Hunter had been “Yetted.”

If you’re not familiar with that concept, let me offer a short history lesson.

In January of 2011, an African-American man named Samuel Frederick Yette died in a Maryland nursing home. He was a man of enormous accomplishments having earned two college degrees, been an officer in the Air Force as well as an award-winning journalist, author, lecturer and university professor. In 1964, he had been appointed Executive Secretary of the Peace Corp after which he became Special Assistant for Civil Rights to the Director of the U.S. Office of Economic Opportunity. He later became the first Black reporter hired by Newsweek magazine where he rose to the position of Washington D.C. Bureau Correspondent. 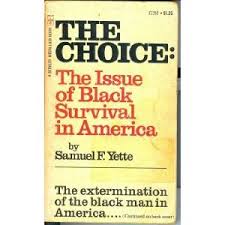 But in 1968, Mr. Yette wrote a book exposing high-level plans within the United States to use birth control and abortion as instruments of Black genocide. Immediately after this book was published, Yette was summoned to his supervisor’s office and fired. He was told that Newsweek was under pressure from the Nixon White House to get him out of Washington. Later, despite the fact that his book was selling well, had won at least two national awards and was being used as a textbook in colleges across the country, Yette’s publisher dropped him and took the book off the market.

…despite the fact that his book was selling well, had won at least two national awards and was being used as a textbook in colleges across the country, Yette’s publisher mysteriously dropped him and took the book off the market.

Mr. Yette was chopped off at the knees because, by the late 60s, population control – especially Black population control – had become a virtual religion for America’s power structure. And these people do not tolerate dissent well – especially when it comes from uppity Black opinion molders. Yette described the situation perfectly in January of 1972 when he told a reporter for Jet magazine: “I do not mean to be pejorative or vindictive, when I say this, but had I been a nigger instead of Black, a spy instead of a reporter, a tool instead of a man, I could have stayed at Newsweek indefinitely.” END_OF_DOCUMENT_TOKEN_TO_BE_REPLACED

Size of a planet and its location around a star are only two out of over a dozen factors that determine whether a planet is habitable. They don’t consider in these news articles whether the system is within the Galactic Habitable Zone.

Hello, Professor Gonzalez, thank you for reading my e-mail, it’s a privilege, I have a fan page http://www.sacra-pizza-man.org/privilegedPlanet.html

May I inquire, does the science behind this page http://www.foxnews.com/science/2013/04/18/perfect-planets-for-life-telescope-sees-distant-worlds-not-too-hot-not-too-cold/?intcmp=features include consideration whether or not the described stellar systems are within the galactic habitable zone?

So many trio sonatas are dreadfully BORING.

I find this so jolly.

It is said that Handel was irascible. Perhaps he showed that he likes people through his music.

MSNBC is a bureau of

MSNBC Host Melissa Harris-Perry » “Kids Belong To Communities,
Not To The Parents or To The Family”

We have never invested as much in public education as we should have, because we’ve always had a kind of private notion of children. ‘Your kid is yours, and totally your responsibility’. We haven’t had a very collective notion, of ‘these are our children’.

This triangle of truisms, of father, mother and child, cannot be destroyed; it can only destroy those civilizations which disregard it. – G.K. Chesterton

This triangle of truisms, of father, mother and child, cannot be destroyed; it can only destroy those civilizations which disregard it. – G.K. Chesterton

Are “Straight” Supporters of “Marriage Equity” Aware of Just WHO They’re Defying?

Jesus said, “When the Son of Man comes in His glory, and all the angels with Him, He will sit upon His glorious throne, and all the nations will be assembled before Him. And He will separate them one from another, as a shepherd separates the sheep from the goats. He will place the sheep on His right and the goats on His left. Then the King will say to those on His right, ‘Come, you who are blessed by my Father. Inherit the kingdom prepared for you from the foundation of the world.’ … Then He will say to those on His left, ‘Depart from Me, you accursed, into the eternal fire prepared for the devil and his angels.’…And these will go off to eternal punishment, but the righteous to eternal life.” – Matthew 25:31-33, 41, 46

“Then He will say to those on His left, ‘Depart from me, you accursed, into the eternal fire prepared for the devil and his angels.’ “

Was Jesus just a nice man, a teacher like Buddha, or is He Who he said He is? He came as the Suffering Servant, in part to show us how much He loves us. His love is a consuming blaze, like a refiner’s fire which will burn off all the dross and slag and leave only gold.

Do you think you can ignore what Jesus said, and who He actually is?

Lord Jesus, in the midst of the folly of war,
your servant, Chaplain Emil Kapaun spent himself
in total service to you on the battlefields and
in the prison camps of Korea, until his
death at the hands of his captors.

We now ask you, Lord Jesus, if it be your will,
to make known to all the world the holiness
of Chaplain Kapaun and the glory of his
complete sacrifice for you by signs of
miracles and peace.

In your name, Lord, we ask, for you are the
source of peace, the strength of our
service to others, and our final hope.

Chaplain Kapaun, pray for us. END_OF_DOCUMENT_TOKEN_TO_BE_REPLACED